How to Play with Your Cat: Interactive Is Best 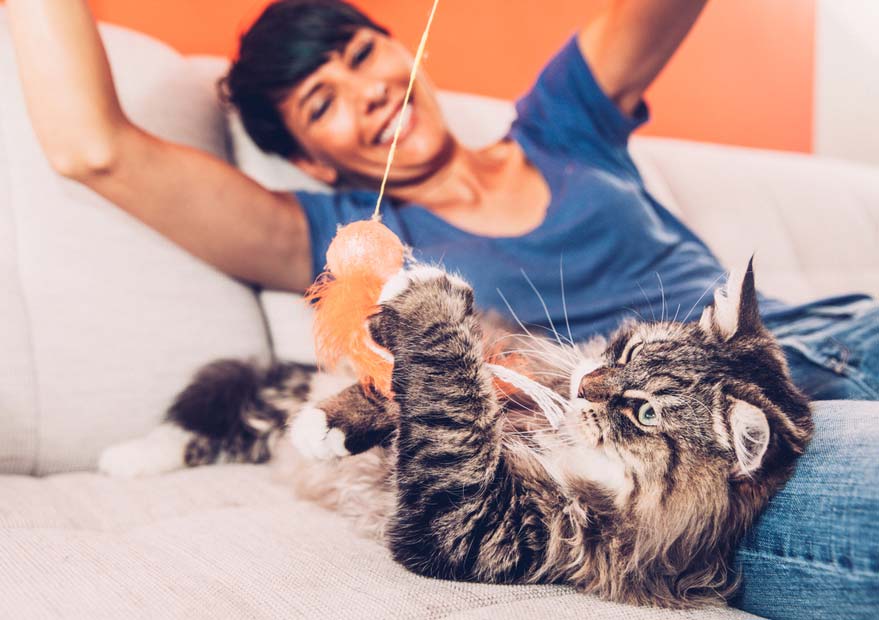 Cats are fun to play with. They leap, pounce, turn 180° or 360° in the air, and generally are a hoot to watch. It's crucial that you develop a routine of playing with your cat every day for his entire life. Playtime helps a cat stay physically and emotionally happy and helps relieve his stress, so he's less likely to engage in negative behaviors in your home. Let's explore the best techniques for playing with cats that maximize those benefits.

Interactive Play with Cats Is Best

Interactive play, or games which engage both you and your cat simultaneously, are best for cats most of the time. Certainly, they will play alone sometimes, too, and that's bonus playtime, but interactive play should be scheduled in at least daily, too.

The reason interactive play is the best type for cats is because it mimics hunting behavior. You use a toy that can be manipulated to act like a bird or rodent, allowing your cat to use all of the predator instincts that are just waiting to leap out.

If a cat isn't able to express those evolutionary urges, it's highly possible that he will become bored or, worse, frustrated and stressed. Those feelings often leads to inappropriate behaviors like urinating outside of the litter box, scratching inappropriate items, or engaging in aggressive behavior toward humans or other pets in the home.

How to Use Interactive Play with Your Cat

Here is a guide for playing interactively with your cat.

Strive for at least 10 minutes a day of interactive playtime with your cat. If you are strapped for time and just can't get it in some days, you can try an automatic cat toy, which mimics rodent behavior, but you must be sure to let your cat catch something, like a throw toy, at the end of the session, or he might get extremely frustrated by his inability to catch the mouse.