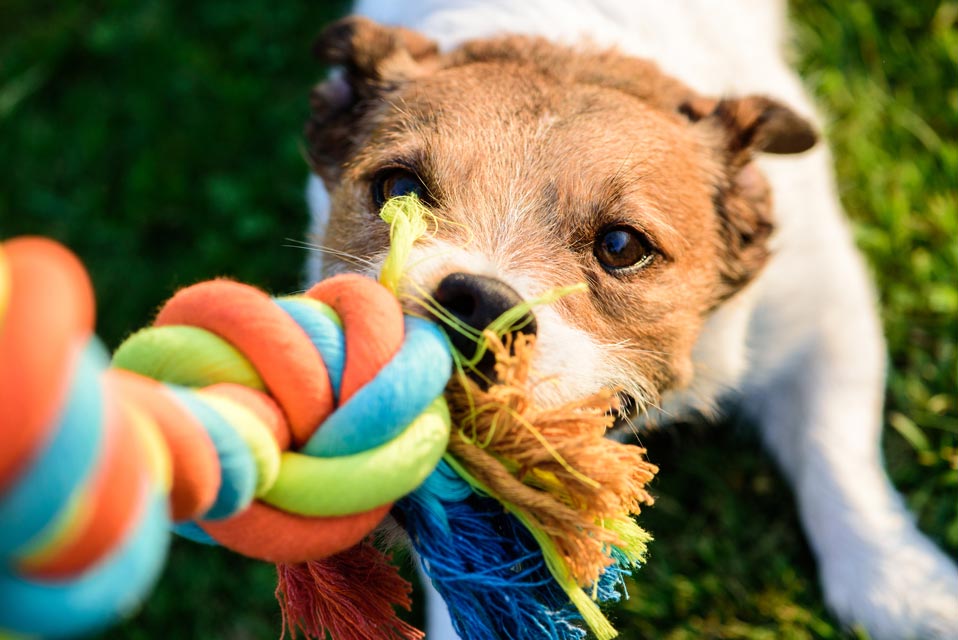 Debate exists over whether tug-of-war is a good game for humans to engage in with dogs. Most dogs love it, but can it lead to injury or even the development of aggression toward people?

Most dogs can play tug-of-war without a problem. However, some situations can cause the game to be a danger to your dog. These include:

Tug-of-War Is OK for Most Dogs

With the above considerations excluded, tug-of-war is a great game for most dogs. There's no evidence that it causes aggression problems in dogs not already displaying them. It can be great exercise, is a wonderful bonding time for a dog and human, and can decrease negative behaviors because it allows a physical and mental outlet for excessive energy.

Tug-of-war can be used to help a puppy learn to play with toys rather than mouth or nip at people's hands. Simply keep a toy nearby, and every time the pup mouths you, hand him the toy and get him interested in playing tug instead. This is a great way to use positive reinforcement to train your dog because he will learn that bringing you a toy results in much greater rewards for him than grabbing your skin with his mouth does.

Tug-of-war can help a timid dog learn confidence. You might have to entice him to begin playing, but once he does, he'll gain experience and have success that can counteract any shy tendencies.

Rules for Tug-of-War with Dogs

Here are some rules you should use when playing tug-of-war with your dog:

Dogs can play tug-of-war with each other, and the same rules should apply. If your dogs show any truly aggressive dominant behavior while playing, they shouldn't be allowed to engage in the game together.