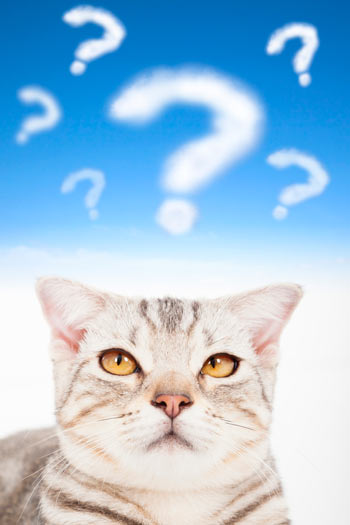 If you're considering using Soft Paws® on your cat's claws but have a concern about them, we're here to help. The following are myths and misconceptions about using vinyl claw caps on a cat and facts about why they're untrue.

Cats control their claws by flexing and extending a tendon. For them, extending the claws is a similar movement to a human extending the ankle and pointing his or her toes. The claws do not actually retract into a sheath, though it often appears that way. In fact, if your cat has no or very little fur around the claws, you can see that they are always "out."

Soft Paws® don't keep a cat's claws from moving the way they always do. You can learn more here: "Fascinating Facts About Cat Claws."

Cats can and do use scratching posts when they are wearing Soft Paws®. Scratching allows the stretching and working of muscles in the neck, shoulders, back, legs, feet, and toes, and cats experience its benefit even if their claws are covered.

Myth 3: My Cat Might Get a Nailbed Infection from Soft Paws®

Cats' claws are different from humans' nails. The claw itself grows in layers from the inside out, similar to an onion. Because of this, Soft Paws® grow out and are shed with the claw.

As long as you are careful to avoid pushing the cap into the skin at the base of your cat's claws while applying the caps, there is no possibility of infection. The nail caps also need to fit correctly. If they are too big, they will extend over the claw into the soft tissues, which can cause irritation. If needed, you can trim the open end (the base) of the nail cap to shorten it.

While applying Soft Paws®, you should be sure not to push them up into the cat's skin. They should be applied only to the claw itself. It's also important not to squeeze the cat's paws or paw pads excessively while applying the caps. If these guidelines are followed, there is no pain associated with wearing the vinyl caps.

As described above, a cat's claws do not retract into a sheath, so the kitty can still extend the claws normally, stretching whenever they like, and Soft Paws® do not interfere with that or cause any pain.

There is a small learning curve to applying Soft Paws®, but it is not difficult. You simply check the length of the caps against your cat's claw size, trim the base (not the tip) as needed, apply a drop or two of glue into the cap, slide it over the claw, and apply gentle pressure (not upward into the skin but side to side against the claw).

For tips on how to perform each of those steps, see this article: "How Can I Keep Soft Paws® on My Pet?"

Myth 6: Soft Paws® Fall off Easily and Cost Too Much

Most cats quickly get used to wearing Soft Paws®, don't bother them, and they stay on for six weeks or more. When your cat is first adjusting to wearing them, she may groom them a bit excessively and remove them more quickly. Being ready to distract her with playtime or a nice meal right after you apply them can help distract her. Also, applying bitter apple spray or YUK to them after they're on can help dissuade your cat from chewing on them.

Also, when you are first learning to apply Soft Paws®, they may not stay on as long as they will once you are a pro.

It's important to ensure that you are using the right amount of adhesive. You can test this by gently squeezing the cap after adding a drop or two of glue. If glue comes over the top of the cap, you've got too much, and it might bother the kitty and trigger her to chew at them. If the inside of the cap isn't coated with glue after you squeeze, there likely isn't enough, and the caps may fall off easily.

Soft Paws® usually stay on for about six weeks, and if you only apply them to your cat's front claws, which means that one package will last for around four to six months. Soft Paws® can cost as little as $3.15 per month.

Myth 7: Soft Paws® Can Be Toxic to Cats

Soft Paws® and the adhesive that comes with them are completely non-toxic once the glue is dry. Even if the caps are swallowed by your cat, they will pass harmlessly through the digestive tract.

There are other claw caps for cats besides Soft Paws® and Soft Claws®. We don't know what is in their products. Accept no imitations for your cat's safety.